It took meticulous planning, organisation and preparation over several weeks and months to create an outstanding event held in the village yesterday. Well done everyone involved and what a great success it was. 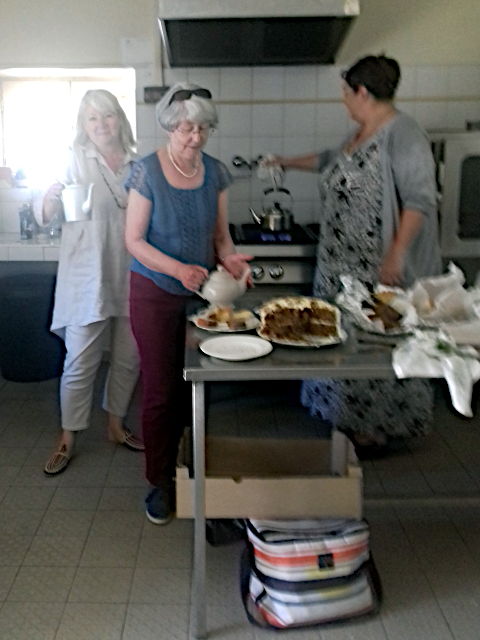 Preparation for the English afternoon tea. Sandwiches, gorgeous cakes, scones, muffins, buns, gâteau etc. were all made by the ladies of the Craft Session.

The music was delightful while everyone enjoyed their afternoon tea.

For some of the ladies a welcome chance to sit and enjoy the fashion show. 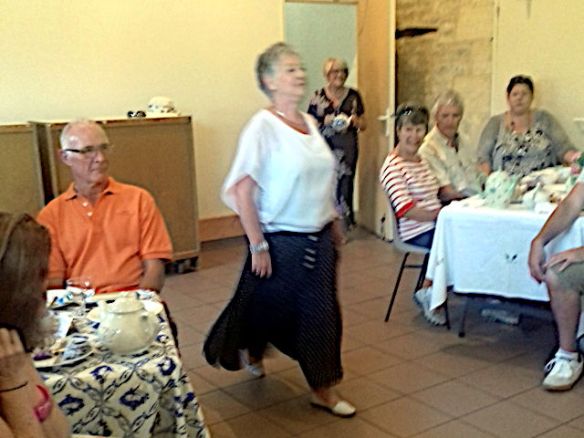 Such glamour from all of the ladies who walked the full length of the Salle de Fête,

Sophistication, I love the outfit.

Jackie (who looked brilliant in this outfit) leading the models for one last walk before the fashion sale.

I could not resist buying a jacket that I had seen a few weeks earlier, plus jewellery and a blouse.

Thank you everyone for your support in attending this event. 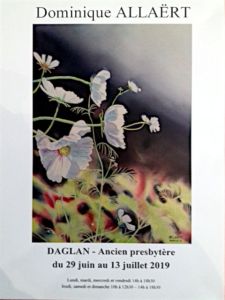 At the Ancien Presbytere in Daglan from the 29th June to the 13th July.

But first a Cats Update

Good news, both of the stray cats who where poisoned last Monday are doing very well. It was a worry especially for one of the cats who we did not think would make it, thankfully she did. She is just gorgeous and Association Pirate are hopeful that they will find a home for her. The agony they both had to suffer this week was heart braking. Our vet thinks that it was very old snake poison that you can not buy now. The Cat Association are looking into it, we do not want more cats to suffer.

Now follows the blog that I intended writing last week but as you can imagine events happened that took precident.

As we drove into Daglan on a sunny Saturday afternoon we were greeted by a display of the most amazing vintage cars.

Paul had collected me at Bergerac airport from my return flight from England. I had been travelling for over seven hours so I was feeling a little travel weary and low in spirit, I needed something to galvanise me once more. Admiring the cars and talking to friends in the village certainly did the trick.

This is my favourite. I can just imagine driving this car with a picnic hamper on the back to a gorgeous place by the river.

Bonny and Clyde or Al Capone springs to mind.

Josephine Baker kind of car. More diva than the other vintage cars. 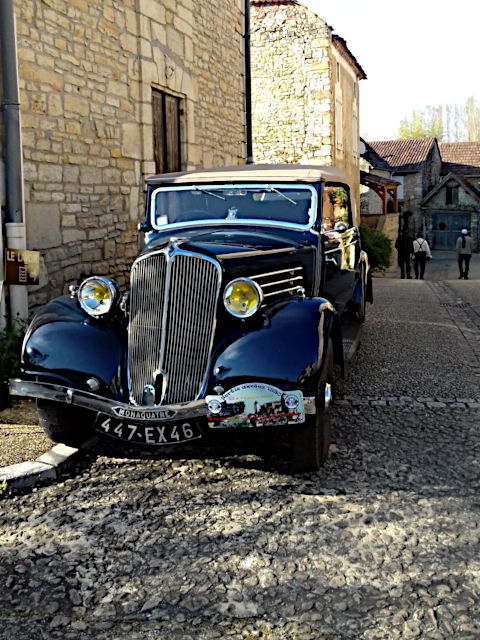 Unsure what era this particular car dates from but it does remind me Elliot Ness. 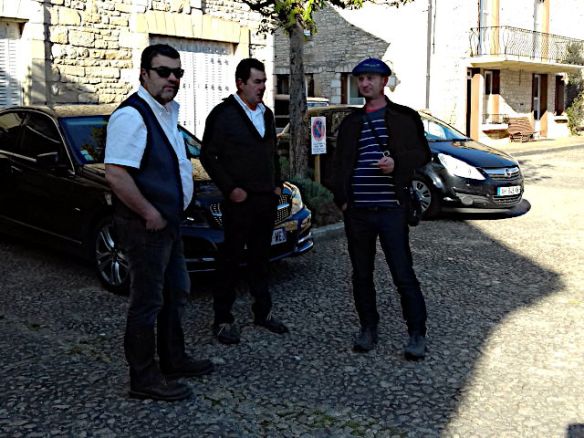 A few of the owners who were dressed in the fashion of time that their vintage cars came from.

Imagine the scene, Monsieur Poirot boarding the Orient Express and in his luggage was the above case all ready for his moustache preparation that evening.
This was my greatest find at the Brocante at La Rogue-Geanac this morning a Vintage and rare but sadly empty kit by Marcel Rochas. Which originally held three bottles containing cologne for Monsieur.

“Anytime you slip on a sleeveless bustier or slide your hands into your skirt pockets, send a silent thanks to the late fashion designer Marcel Rochas”, (Sophie Rochas 2015).

In the ‘40s and ‘50s, Rochas pioneered such silhouettes and helped define that “je ne sais quoi” of French glamour. During his 30-year career, which began with perfume, Rochas dressed the Duchess of Windsor, Marlene Dietrich and Mae West.

“Hold me back”, I found another linen stall.

The morning shadows are getting longer but it is still a gorgeous view any time of the year. 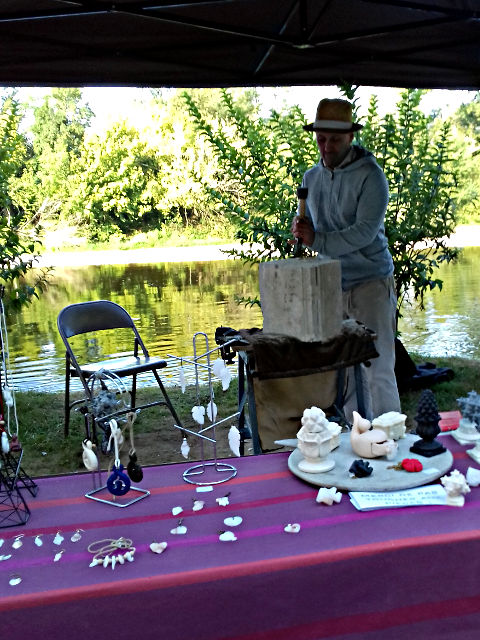 Paul jokingly asked the stone mason if he started with a large block and it got reduced to the items at the front of the stall. A hearty laugh was the response. 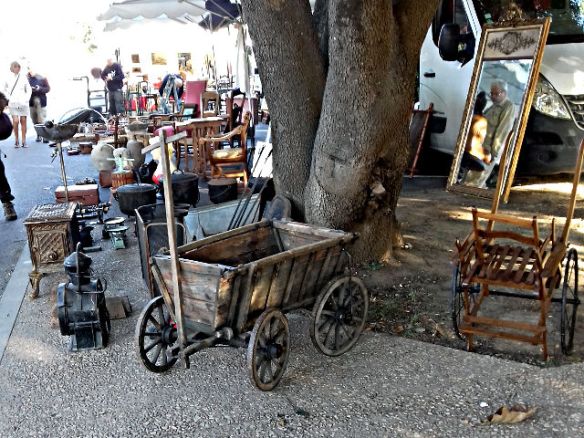 I loved this vintage cart. You can imagine it full of gorgeous flowers.

Browsing complete, in need of a treat… hot chocolate with cream. 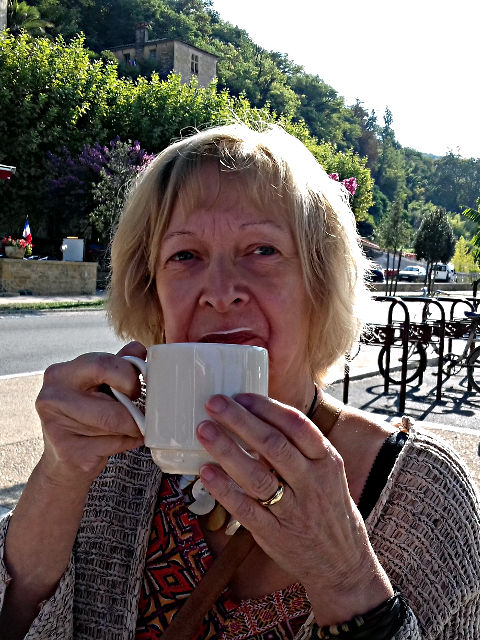 Here is my version of a moustache, delicious.

Recently opened, a museum from the time period of 1860-1940. Originally it was a father and daughter who initiated the creation of a museum to showcase vintage cars. It has developed into streets lined with shops of every description as well as artisan workshops, a garage, a weaving mill and more from the above time period. 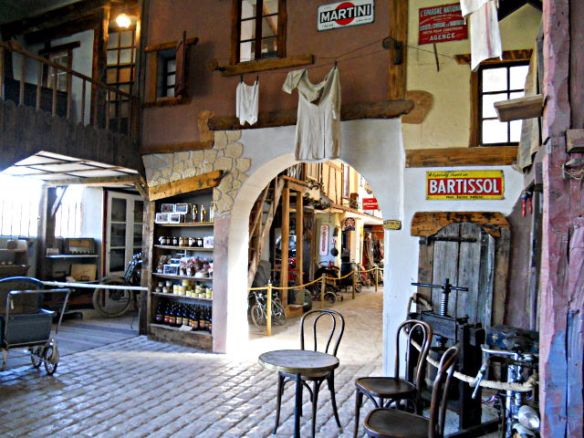 This is the start of the walk back in time.

At the end of the first street is this magnificent Rolland Pilain from 1924.

Wonder along the cobbled streets to peer through the windows where time has stood still. 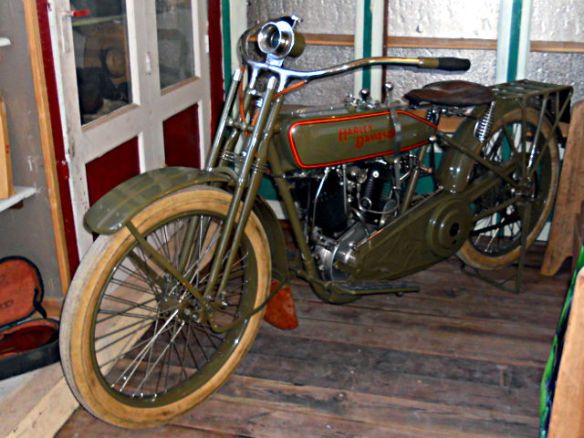 Wow a Harley, Paul and I had to go back and have another look, still beautiful after 100 years. 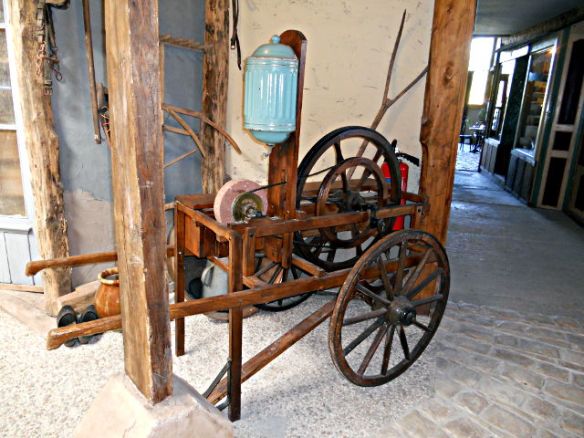 Long ago people would push this cart around the streets shouting “Any knifes to sharpen.”

The cheese makers shop with all the equipment.

There are a many more shops than we have included above, visit time is recommended to be between one and one and a half hours, so well worth a visit or two. You can also buy a drink at the bar to enjoy in the little Parisian themed cafe.

The Museum has only been open for a couple of months and is to be found at Allas Les Mines just by the bridge that crosses the river Dordogne. The museum is open from April until November 10h-12h and 14h-18h except Wednesday and Thursday. During July and August opening is from 10h-18h, 7 days a week.

If you are hungry, the Garbarrier is a rather nice restaurant with magnificent views overlooking the river Dordogne, it can be found across the car park from the museum.

Event:- Castlenaud October 28th and 29th from 10:00 until 16:00. A Medieval Garrison showing the deployment of men at arms, craftsmen, chamber maids and a demonstration of weapons and armour.

On our arrival at the Brocante in Sarlat last Saturday morning the first thing that I noticed was a Sgt. Pepper’s costume and wow it did bring back fond memories of the Beatles brilliant album and the area of “flower power”.

I remember my parents not letting me get a ticket to go to a Beatles concert because they thought that they were a bad influence! So I stood outside the concert hall with hundreds of other fans waiting for the Beatles to come out, I was a few inches for Paul. 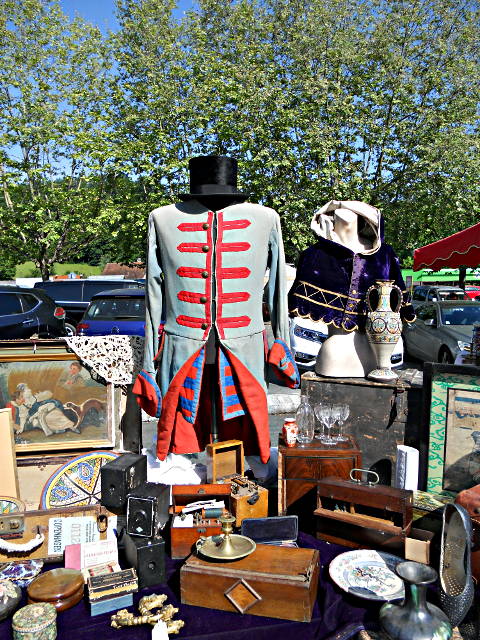 It is fifty years since Sgt. Pepper Lonely Hearts Club Band was released.

Another wonderful memory recalled from seeing this peddle car.

A boy that lived on the same road as my family had a red peddle car for his Birthday that I fell in love with. I was only five or six.

This is one of the brilliant things about Brocantes, the memories, whether it is your own memories or other peoples memories. For example; when I look at linen pillow cases that have been embroidered with the initials of the persons name and I wonder who the person was and what history do they have?

We found a chair for the veranda and it is so comfy. Unfortunately only one chair so Paul and I are on a “time share”, one hour me, one hour Paul, it works until we find another chair, perhaps at the Daglan Brocante this weekend, 3rd and 4th.