We traveled to Castelnaud-la-Chapelle this morning then on to Beynac before returning home through Vitrac Port and Cenac checking out the roads and fields. Our findings were that quite a number of fields are under water and a few roads are closed.

The D53 between St Cybranet through to Cenac is closed.

The D53 from Castelnaud la Chapelle to Les Milandes is closed.

The D703 leading from Vitrac Port to Montford is closed. 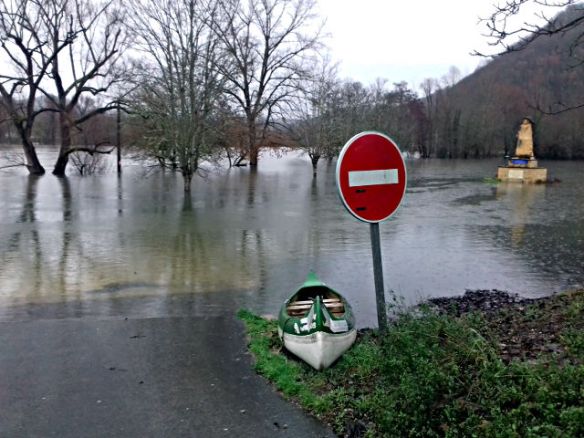 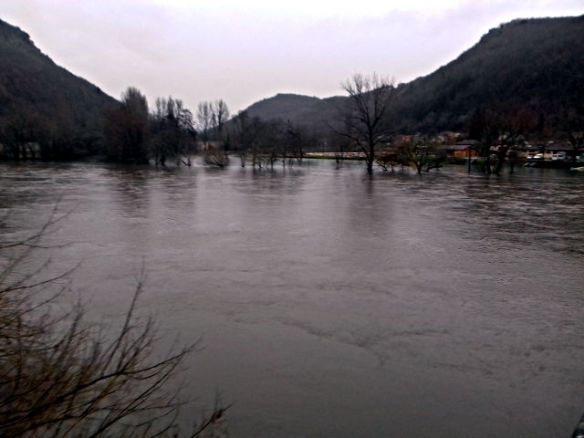 Looking at Castlenaud from across the river. The treeline in the middle of the river is usually where the banks are. 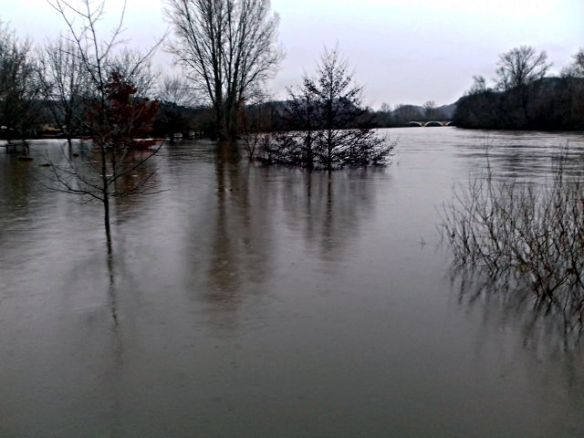 This is where we like to picnic on the shore at Beynac. Today no land was to be seen it is completely water logged. 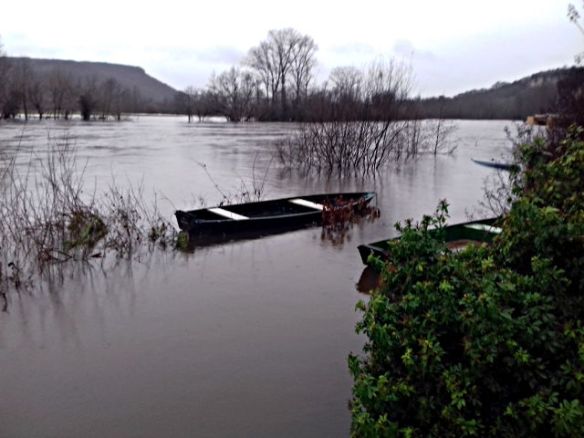 The boats above were on dry land last week.

Vitrac consists of a port and a small village near the hamlet of Monfort. Vitrac Port is located on the D46 between Sarlat and Cénac et Saint Julien, Vitrac village is about a kilometre away along the D55.

Although we drive through Vitrac Port a couple of times each week on our way to and from Sarlat we have never stopped to look at the twin villages before, so on a very cold but sunny day we ventured out to take a look. 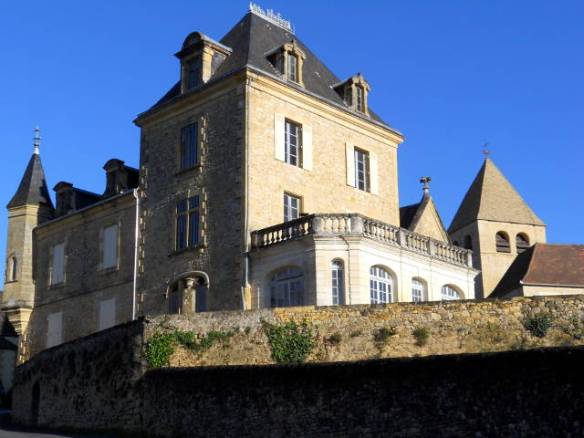 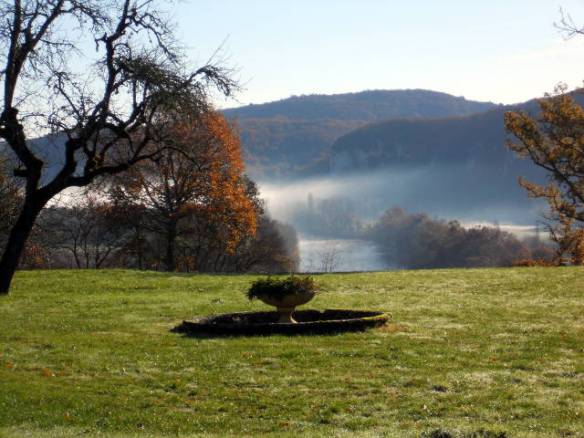 Vistas over the Château grounds to the swirling mist on the hills and the dordogne river in the distance.

The village itself is quite small, in the main square is the church of Saint Martin, opposite is a narrow lane that leads off to the artists studio. 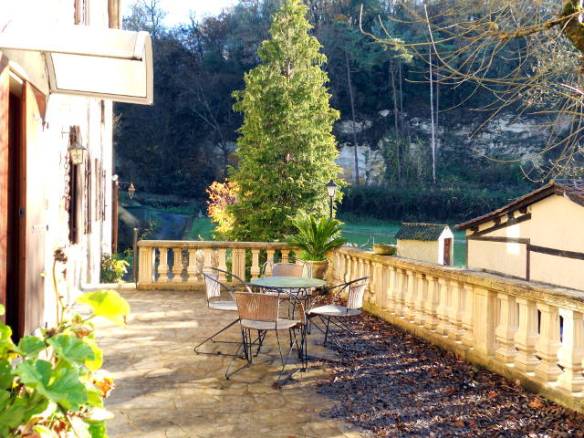 This photograph taken at Vitrac Port reminded me so much of a scene from the film ‘A Good Year’, staring Russel Crow. If you have seen the film it is the scene when he is taking photograhs of the grounds in order to sell the estate. However, each photogragh he takes reminds him of his deseased Uncle and the wonderful memories of his childhood. The photogragh just needed a smoked cigar in an ashtray on the table to complete the scene. 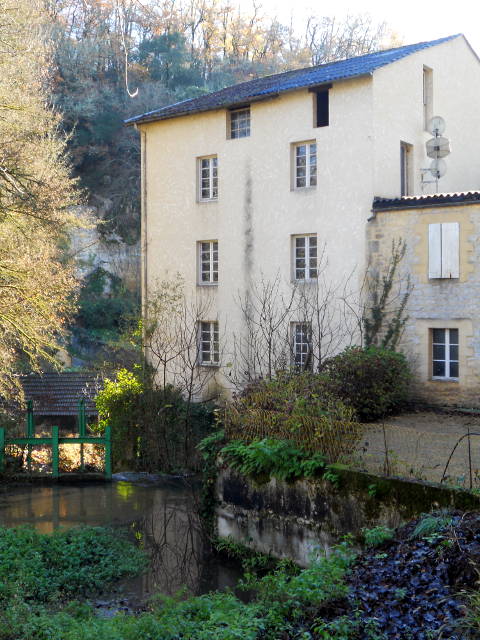 The rushing water of the Dordogne completes this magnifisent property. 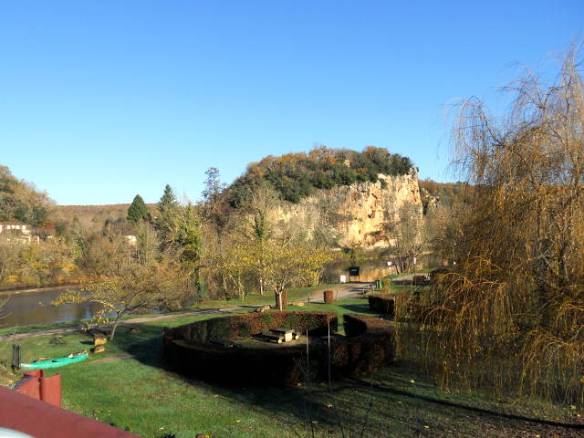 Just over the bridge there is an excellent park area where each table and benches are enclosed in a horse shoe shaped hedge.

Of course in Spring and Summer you can rent a canoe or two from Vitrac Port and slowly meander your way down the river. Or you could go further along the road and visit Monfort, Domme, Daglan or Sarlat.

Close by is the Château de Montfort. 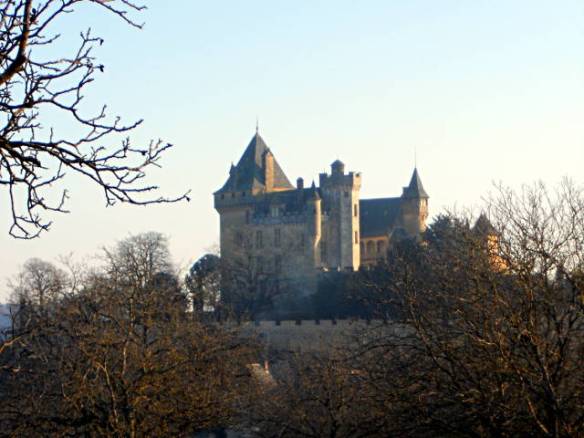 The Château has had a turbulent history starting with Bernard de Casnac who was not a very pleasent person to meet if you were Catholic for he swore “to cut to pieces” any Catholic that he enounted. Which was at odds with the peaceful Cathars at that time! Then came the infamous Simon de Montfort and a list of others throughout history who pilaged, burned, rebuilt and destroyed again. In fact it is quite a feat for the Château to be here at all, but I am glad it is.

Sadly it is in private hands so not open to the public but it is still worth a visit just to see its magnifisant turrets. 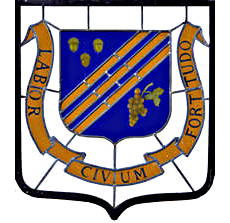