The Fête de la Gastronomie was a great success. The rain clouds had rolled away and the sun was shining brightly on the vast number of people who attended the event in Daglan yesterday. Fruit, vegetables, meat, cheese, wine, bread, cakes, the list goes on. Everything that you would want to eat in the square or to take home. No need either to look for something to drink there were wine sellers, artisan beers and a bar selling wine and soft drinks. They also had cooking demonstrations and a truffle dog who always seems to be attracted to the aroma of the sausage stall.

It was an all day event which everyone enjoyed.

Not only in the Place de la Liberté, there were stalls lining the main street too.

“The bar is now open for customers”.

The aroma of French markets is wonderful. I particularly liked the spice stall.

Bunches of garlic for sale.

An excellent selection of cheeses.

Who would say no to a bottle or two.

Over the last few months the temperature has been so high, in fact too high for me and far too high for our cats to tolerate. Ranging from high 30s C up to 43C every day and reaching 36C in the shade. Staying in doors was the only option
.

However, Cleo had a good idea when she found a little water at the bottom of our bucket that we keep on top of the well. Front paws were easy, now how to get the back paws into the water. Try has she might it was impossible, but so funny.

The heat of the day melted our candles on the veranda.

Ever resourceful our local supermarket was collecting the rain in the large bin. The rain came down so heavily that it was like having your own waterfall at the side of the supermarket. Needless to say the temperature has dropped to a very comfortable mid twenties, all ready for the Fête de la Gastronomie in Daglan tomorrow. All local produce from the area, plus the amazing truffle dog.

An excellent first meal of the year was provided after the Club AGM yesterday, created by Chef Fabrice of La Cantine which is situated in Daglan village.

Of course it is not only the food which draws people, club business, projects, election of new committee members and it is a brilliant chance for a catch up with friends and a great opportunity to meet new people. 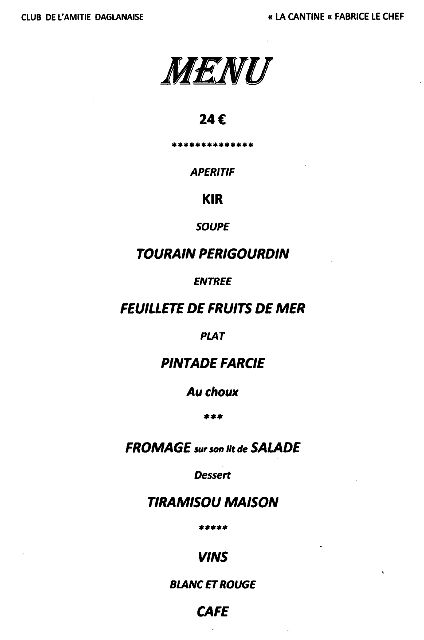 My main course was a delicious vegetarian option. I must try and get the recipe from Fabrice.

Congratulations Elaine for your appointment to the Committee.

Presentation of flowers or a bottle of wine for Birthday celebrations.

Gorgeous smiles. Look forward to our next meal together.

Event:-La Chandeleur will be celebrated on the 2nd February. It originates from an ancient Latin and Pagan festival. Later becoming the Christian celebration of Candlemas, bringing hope and warmth in the midst of Winter.

Traditionally in France It is when people make delicious crêpes for everyone to enjoy. You should hold a gold coin in one hand while flipping the crêpe in the pan with the other. If you succeed in flipping the crêpe, you will have a prosperous and fortunate year ahead.

They say the woods around Daglan
grow secrets in the ground,
and the Perigord Noir hide the rarest
of truffles to be found.

The truffle may be ugly,
found by pig or dog,
but everyone agrees
its flavour is to savor.

Hundreds of people were tightly packed around a marquee full of truffles in the Medieval Quarter of Sarlat last Saturday morning. After waiting a few minutes a loud sigh was heard from the gathered crowed as the side panels were removed from the marquee and each person breathed the amazing truffle aroma emanating from within.

And this is what it was for, Perigord Black Gold of every size and every price.

A close up. The truffles in the basket on the left were grade 1 priced at €900 per kilo. 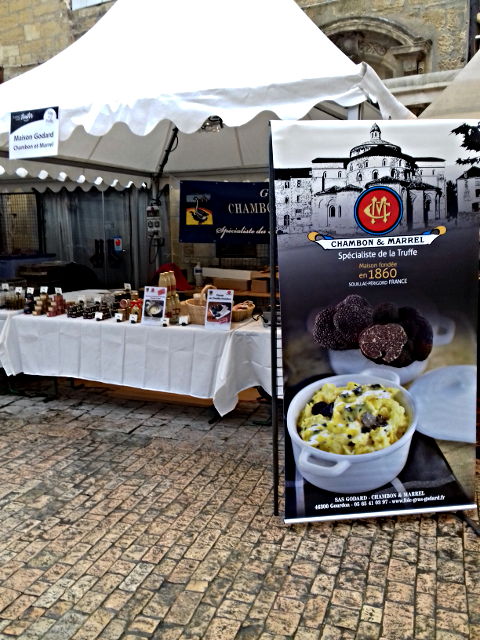 There were also stalls selling delicious Street Food and with demonstrations of truffle based cuisine from Master Chefs.

We are very predictable, we looked for the truffle macaroons. Which are delicious. Just had to buy four, for testing purposes of course. 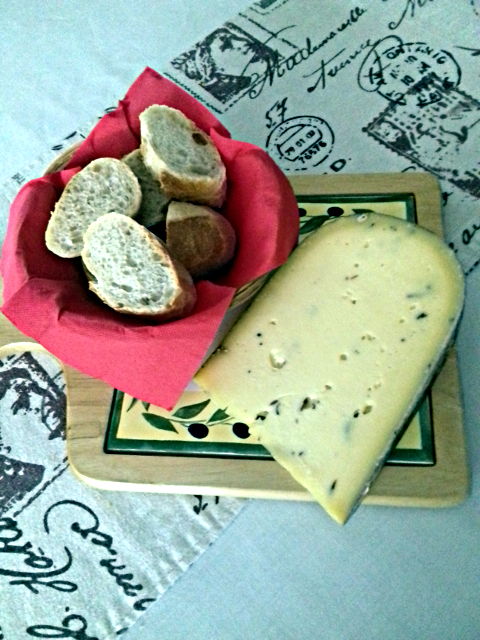 A first for us, truffle cheese. Which is rich and creamy with the distinctive flavour of truffle, I can highly recommend it.

Don’t miss Daglan’s Truffle Market which is open until February.

The word Galette comes from the Norman word ‘gale’ which means flat cake. It is a word used in French cuisine for various types of flat round or free form crusty cakes that are eaten during Epiphany from the 6th January, it symbolises the fertility and renewal of the earth, which is linked to the extension of sun light during the day.

In Christianity it is a symbol of the manifestation of Jesus among men and celebrates three episodes:- the arrival of the Magi, the wedding in Canna and the date of the baptisms of Christ in Jordan.

Inside the galette is a small bean or china gift which dates back to Roman times. It was white or black and was used during the Saturnalia festival to elect the king of the Feast. Today, the person who finds the gift in the galette becomes King or Queen for the day and wears the crown.

Tradition says that the galette is to be shared with guests who are also offered a glass of cider, muscat, sparkling wine or champagne. Which is very popular in South West France.

This particular fragipane filled galette was purchased at Delices De Pito Cénac, complete with the crown and flags. The flags are placed around the galette, it is cut into portions and served. The king or Queen and their guests act out what is written on each flag. For example ‘make a grimace face’, ‘recite the alphabet’ or ‘draw a mustache on your face or a guests face’. The fragipane filling originates from Marie de Medici, Henry IV’s second wife who brought the recipe to France.

If you find a special yellow bean in the galette from Pito, with the words ‘Bravo, vous avez gagne un mug’ written on the bean you take the bean back to Pito to receive a special gift a decorated yellow mug.