To be found in Daglan village by the footbridge over the River Céou behind the Salle Des Fêtes. This magnificent Plane Tree was planted at the end of the French Revolution in 1789 to symbolize Liberty, and is still going strong.

It is by far the largest tree in this area and has not yet finished growing. They can grow from between twenty five to fifty five meters high and can live for up to 4000 years. What tales it could tell of the history of the village and its people.

The tree’s characteristic bark breaks into scales called rhytidomes which release yellowish areas and allow the cork to appear. The bark has a snake skin appearance which it sheds every Autumn.

Its fruit is generally hairy, usually hanging in balls that mature in Autumn, unsure if edible or not.

The tree leaf can be used as a dressing against hot and severe tumours, to reduce the swelling.

Several species are planted as urban ornamental and alignment trees along streets and roads particularly in the Perigord area. 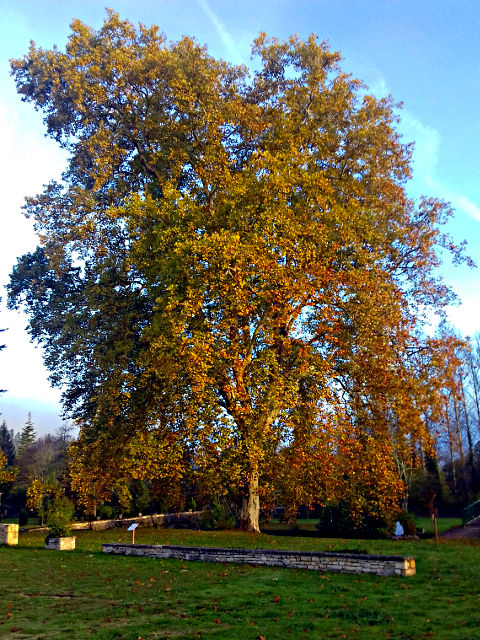 Just had to give it a hug. 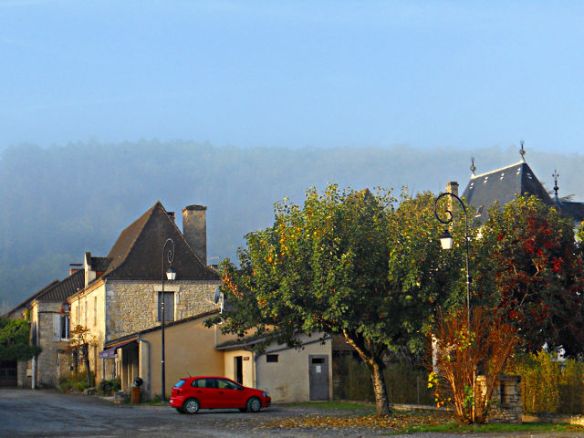 The gorgeous mist in the early morning shrouding the hills around the village in a coat of grey. Which was transformed into brilliant sunshine later on in the day.

We will not be able to blog for a couple of weeks. My husband was diagnosed with prostrate cancer a few months ago. To say the least it has been a very stressful and worrying time, however he is going to have an operation on the 30th October. So all keep your fingers crossed for him.

Take care my darling, you will be home soon.

Shorter days and chilly nights call for soups made from root vegetables. While there has been a growing move towards seasonal vegetables in England, the French markets and supermarkets have been much better at presenting their customers with seasonal foods.

As the leaves begin to fall from the trees we have noticed some strangely shaped and oddly coloured vegetables appear on our local market stalls.

To me, some of these root vegetables look like a new variety but no, they have been cultivated for centuries when seasonality was imposed onto people rather than offered as a choice. Then they were forgotten when the move for more exotic vegetables and all year round availability became the norm. As always the French have a wonderful name for these vegetables, légumes oubliés (forgotten vegetables).

At first sight Paul and I were unsure if the purple, sometimes black carrot and the yellow carrots were actually carrots. So we bought some to try from a organic produce seller in St Cyprian market and decided they were delicious.

The purple and yellow carrots taste more peppery, than their classic counterparts, peel them roast them, place them into casseroles or soups the flavour is outstanding.

All ready to make a hearty soup so here is the recipe.

Serve as it is with chunks of fresh bread or you could grate a strong cheese over the top, either way delicious.

It freezes well too.

A hearty soup for a Autumn or Winters day.

Local News- Maison Carré Patisserie at Castlenaud will be closed from the 23rd October to the 5th November.

We often have breakfast at Pâtisserie Massoulier on our morning visits to Sarlat. It was so cold and foggy last Saturday that a hot chocolate drink was especially needed to warm us up a little, it was such a welcome treat before we set off to slowly roam around in the market.

Today however, he was directing people around the market with a traffic cone loud speaker. He is such a joy to see and so funny.

The covers were up on the market stalls to protect against the Autumn chill of the morning. Which thankfully did not last too long before the sun came out and reached a temperature of 22C.

I can never resist taking a picture of “Le Badaud” the relaxed onlooker gazing out across Sarlat Medieval Quarter. The sculpture by Gérard Auliac and can be seen looking out over the Place de la  Liberté.

Paul saw an animal painting on the back wall but I saw a landscape scene! Whatever it is the light really helped to illuminate the painting.

Carried out within the framework of the Residences of Art, Sarlat – October 2017
This installation is based on an exploration scene of the Cuze underground canals passing under Sarlat.

Recently opened, a museum from the time period of 1860-1940. Originally it was a father and daughter who initiated the creation of a museum to showcase vintage cars. It has developed into streets lined with shops of every description as well as artisan workshops, a garage, a weaving mill and more from the above time period.

This is the start of the walk back in time.

At the end of the first street is this magnificent Rolland Pilain from 1924. 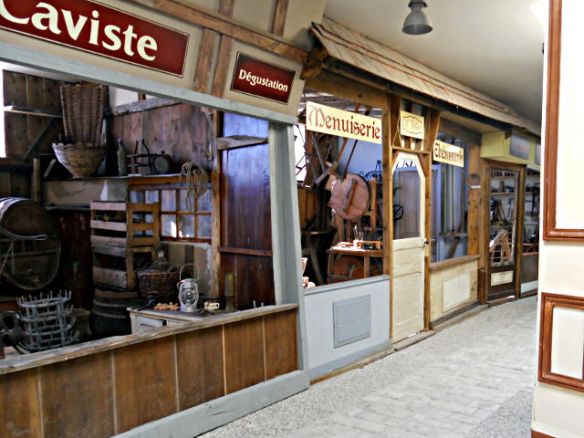 Wonder along the cobbled streets to peer through the windows where time has stood still.

Wow a Harley, Paul and I had to go back and have another look, still beautiful after 100 years.

Long ago people would push this cart around the streets shouting “Any knifes to sharpen.”

The cheese makers shop with all the equipment.

There are a many more shops than we have included above, visit time is recommended to be between one and one and a half hours, so well worth a visit or two. You can also buy a drink at the bar to enjoy in the little Parisian themed cafe.

The Museum has only been open for a couple of months and is to be found at Allas Les Mines just by the bridge that crosses the river Dordogne. The museum is open from April until November 10h-12h and 14h-18h except Wednesday and Thursday. During July and August opening is from 10h-18h, 7 days a week.

If you are hungry, the Garbarrier is a rather nice restaurant with magnificent views overlooking the river Dordogne, it can be found across the car park from the museum.

Event:- Castlenaud October 28th and 29th from 10:00 until 16:00. A Medieval Garrison showing the deployment of men at arms, craftsmen, chamber maids and a demonstration of weapons and armour.

This was a first for me, a beautiful praying mantis settled on my arm a few days ago when I was catching the last rays of summer sun in our courtyard. Startled, I think that the mantis and I just froze, then it turned its head towards me with its extremely large eyes. Of course I shouted for Paul to get the camera. Which must have unnerved it a little because it moved off my arm and onto the chair leg.

They are so much bigger than I anticipated them to be.

You can see the size of the mantis compared with the phone on the floor.

All mantis have enlarged forelegs which are adapted for catching and gripping their pray, their upright posture, while remaining stationary with folded forearms, has given them the name of “Praying Mantis”.

In the picture above you can see that our visitor tried with some success to camouflage itself.

Not so lucky on a white wall but such a gorgeous colour.

Mantis were considered at one time to have supernatural powers by the Ancient Greeks and Ancient Egyptians. They are among the insects most commonly kept as pets.