Even more photographs of one of our favourite château’s.

In 1966, the Château de Castelnaud was listed as a Historic Building at the request of its new owners, Philippe and Veronique Rossillon. Today it is owned by their son, who is president of Frances National Federation for the protection of heritage sites.

The well, which is 46 meters deep is protected by the surrounding curtain wall, 15 meters high and topped by a parapet walk for defence purposes.

You can just see my sister looking down into the well; she was shouting that she could not see the bottom.

The trébuchet which were fired by a counterweight were the most powerful machine of its time and remained in use until the 16th century. Despite its slow rate of fire (only one or two per hour) it was regarded with such fear that its presence was enough for the opposition to surrender. The stone balls on display weigh more than 100 kilos. 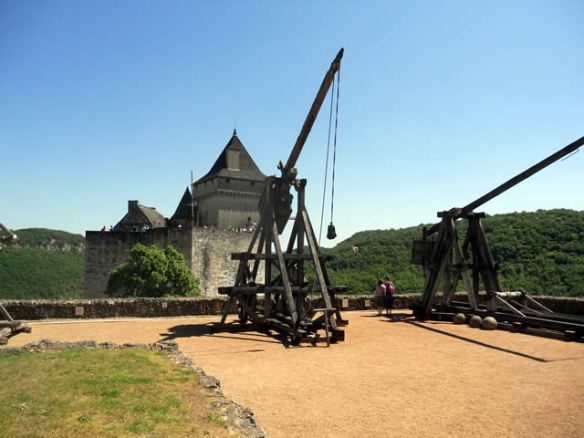 These smaller towers were added to the existing fortifications to counter artillery fire and position the defenders own cannons. Here the walls are five meters thick. 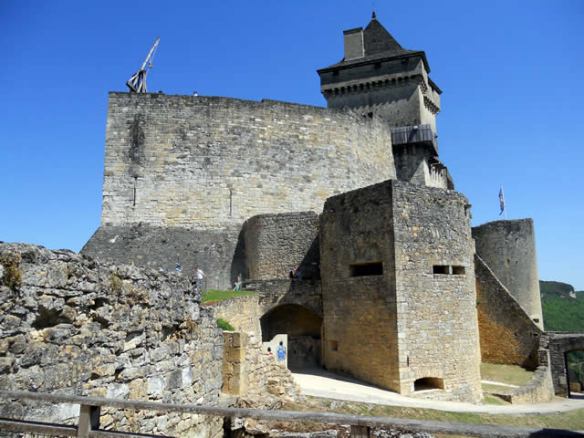 This picture of a very relaxed sage was taken at the tavern near the village shops at the foot of the Château.

June-guided visits and firing the trebuchet every weekend.

July-Tuesday to Friday, games played in the medieval period.
Night visits from 14th July- use of weapons from the 7th July to the 29th August